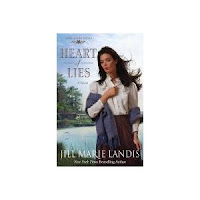 Raised on the streets of by Dexter Grande, Maddie was taught to beg, steal and cheat her way through life.  As Dexter’s gang dissolves, Maddie moves to the bayou with her twin “brothers”.  The story develops as the twins appear at the doorstep one night with an eight year old girl they have kidnapped and need Maddie to hold hostage.  Against her better judgment Maddie agrees, but trouble soon follows as Pinkerton agent Tom Abbot becomes part of the case.  Tom, who is also working for Laura Foster McCormick, from book one in this series, Heart of Stone.  Maddie begins to question who she is, who her family really is and if she can really trust Tom.
I was excited to hear about the second book in this series being released.  I really enjoyed the first book and couldn’t wait to read more about the sisters from .  I think the romance isn’t over the top, but nice, old fashion and clean.  It's refreshing to find books like this, ones I don't have to worry about while reading.
If I had to pick one thing that I didn’t like it would be Dexter’s character.  Landis did a fantastic job making him into a creep and I really shuttered every time he graced the pages.  I was so disturbed at the thought of Maddie taking part of the changing of the kids.  I am glad she was able to find Tom and eventually Laura.  I hope that in the next few book that it will touch on that she has been able to find peace in her life.
The novels and the writing really make me think that if you love Anita Stansfield books, you will enjoy these series.
I'm looking forward to book three. Hopefully it doesn't take a full year to come out!
Posted by Debbi at 1:59 PM No comments: