Wow. My first web-award and I feel that I've totally let this blog go for the past few months.

Before my move I was nominated for a Brillante Weblog award by Jeanette from A Comfy Chair and a Good Book. She has such great ideas and each time I've read a book recommended by her I haven't been dissapointed.

So now it's my turn to recommend some awards. Some of my favorite (non-personal) blogs to read are:

Rules for award:
Post the logo on your blog.
Add a link to the person who nominated you.
Nominate 5 other people for this award and add links to their blog.
Leave a message for the people that you nominated.
Posted by Debbi at 6:15 PM 3 comments:

Emma Smith, Woman of Faith
Anita Stansfield
4 Stars
I picked up this book while in Utah and it was a quick and easy read. True Anita Stansfield fashion. I thought it was a nice read and I did love reading more about Emma Smith's life and struggles. Some parts lacked and I really wanted more information, but I think there are more books on Emma that are available that might have more information then this book. This book was under 200 pages.
Emma was a true woman of faith. I can't believe all the trials that she went through and all the children that she lost. I really don't think that I could do it. She was amazing.
I recommend this book if you are looking for a easy read on her life. It did make me want to pick up my copies of The Work and the Glory again and re-read them.
Posted by Debbi at 5:59 PM No comments: 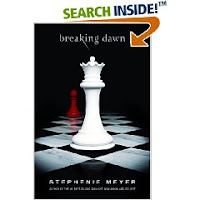 So I know, some people might not want to be my friend after this review, but it's an opinion. I can like red, you can like blue. It's what makes this life interesting, different opinions. So, if you are going to leave me a nasty comment about how I am wrong, please keep it to yourself. I don't think anyone else is wrong who loves this book. This is just what I think.

Imprinting. I've thought the idea is strange and wrong since the first introduced and really was disappointed that Jacob imprinted. My main complaint with this is that he imprinted with a half-vampire. I thought the whole point of imprinting was to make sure that the pack "line" continues. How will that work with a half-vampire? I think I would have been happier if he would have just ended up running off with Leah and never imprinting.

Carlise - is he a super Dr. or not? If he has had all these years of medical training, then why couldn't he do more for Bella. I understand that he was dealing with a half vampire baby, but he was on a hunting trip when he had just said it would be any day. He also I think could have just done some sort of C-section and taken the baby out at anytime. It just seemed so strange to me that he left during this critical period.

Rose was so freaky during this book. I really didn't like her. I know she was thinking about the baby but she was strange. I also missed Alice, she was absent for so much of the story, even before she left. I like Alice.

Bella's love for this baby. Ok, I know some mom's love their baby from the second they take the pregnancy test, that's great, but most of these women aren't carrying a baby who for all they know will eventually kill them when they are born. Most of these women aren't Bella, who was so against turning into her mom - getting married at an early age and having a baby so fast. I think that if someone told me that I was carrying a monster baby who was going to kill me, it would be something to think about. Bella was so passive about it, she never even had one doubt. It really bothered me.

The book was getting a bit predictable. There was a whole section at the beginning about the immortal babies. Of course Bella was going to have a baby after that. It was so easy to see.

Not that I wanted Stephenie Meyer to write more graphic descriptions of the physical encounters that Bella and Edward had, but Bella didn't even remember certain aspects. Edward breaks a headboard in half and she doesn't even know? Where is her head, she is still a human woman at this point in the story. Seemed a little strange.

At the end of the book Bella makes a comment to Jacob and calls him "son." This really bothers me. Really.

Vultri. What's all the hype about. I think it was so over-done. Nothing even happened. Since when do they let you walk away - or even walk away themselves? It bothered me there wasn't even a fight. I wanted a fight and some excitement after all the talk about it.

Basically everything was so too-good-to-be-true. I like happy endings, but I think Harry Potter had a happy ending too and people died and bad things happened in it too. Something should have happened, but instead we got everything wrapped up in a pretty little package with a boy on top. It was just too over the top for me. I think a good ending would have been Bella becoming a vampire, even having the baby, but not having Jacob too - that made it too much.

Didn't it bother anyone how "in-love" Bella seemed with Jacob each time he came to visit. Sure, it was the baby, but I really thought this was strange. She had just got married and now each time she saw this different boy she got all happy and giddy.

I am glad that Jacob became the Alpha. Really happy that he stepped it up.

The chapter titles in Jacob's section really cracked me up. They made me smile and I loved them.

Jacob's section. I know a lot of people didn't like this but if we read this in Bella's point of view I think all we would have heard is "I am pregnant, sick and feel like crap." It was much more interesting from Jacob's point of view.

Perhaps if I re-read this book I might like it more. I'm not going to re-read it for a while. If I have to pick a favorite book out of the series it would be book two.

I am happy that Bella is with Edward. The reason I didn't enjoy the book doesn't come down to the fact that I was a "Team Jacob." I never thought that Jacob would win her over in the end. I just can't stress how much happier I would have been if he would have gone off alone or with Leah then imprint.

Again, these are just my thoughts. I don't think you are wrong if you like it, so please don't tell me I am wrong. We are all entitled to our own opinion.