Confessions of An Obsessive Reader

This is a borrowed survey from Becky and then Susan. I love surveys so here we go:

What book are you currently reading?
I feel like I am currently between books. I just finished the Uglies series. I have started Inkspell and still have the desire to finish it. I am also reading The Read Aloud Handbook, I love it. Each Sunday night I try to read a talk from a book my mother sent me for Mothers day- Rise to the Divinity Within You, Talks from the 2006 BYU Women's Conference. I also am trucking along in the New Testament. I just finished 1 Thessalonians today.

How do you decide what book to read next?
I have a piles of books around my house. I sometimes I pick something from there. I have a lot of books I've acquired from Book Swaps. (I'll be doing another one in October.) I have a list saved in my computer and also carry it with me in my purse. I also am a huge fan of browsing the library.

Do you always finish books, or do you give up on them? If you give up on them, how many pages does it usually take?
I don't always finish a book. I give it a chapter or two but I will put it down if the language is offensive to me. I have a hard time with this because sometimes I am very drawn into the story but see the language as offensive and/or not necessary so I put it down. It's just a rule I have.

Do you ever re-read books you love? If so, how often? Give examples, if possible.
You betcha! Harry Potter, Twlight, Scarlet Letter, To Kill a Mockingbird, just to name a few.

Can you read books in noisy places (e.g. trains, buses, crowded rooms)?
I have two kids. I can turn on a movie and read. I believe that this qualifies for a yes answer. Sometimes this can be a very bad habit.

Where do you acquire most of your books? If you are a library user or borrower, how many books do you borrow at once? If a buyer, how many books do you usually buy at once?
I am a stay at home mom and my husband is a full time student - therefore I am a library user. I would love to be a buyer, but I can't at this point in my life. I borrow probably between 5-10 books each visit and I visit 2 different city libraries twice a week. That number is including children books so it might seem high.

Do you have any unusual tendencies while you read?
I love to eat milk chocolate chips and drink a cold coke while I read. I love to have a blanket to curl up with and will actually turn on the air container just so I can be comfortable with a blanket.

We know most of us can read just about anywhere, but specifically where and when do you do your best reading?
I do my best reading during my children's nap time. I sit on the love seat by our front window - with my coke and chocolate chips and read away. On days that I don't read I feel very grumpy by 5pm. I love this break in my day to relax, escape into a book and recharge.

Alrighty - I showed you mine, now show me yours. I am not going to tag anyone, but this survey was fun and I hope you enjoyed it and will take the time to take it as well!

So this series is recommended by Amazon readers if you like the Twilight series. Since I have first seen it it has intrigued me. Here is the scoop:

This is set in a city on the earth long after our world, as we know it, has been destroyed. Here in Uglyville, we find Tally, the main character, who is a few months away from her 16th birthday. When you turn 16 you undergo an operation and you become Pretty. You then get to move across the river to Prettytown. Uglies stay in ugly town waiting for this day and play tricks. It is during a trick that Tally meets her new friend Shay. Shay doesn't want to become a Pretty and thus a plot is developed. What happens to you if you don't want to become a Pretty? What happens if Uglies run away?

So, what did I think of this book? I loved this book and couldn't wait to get my hands on the other books in the series. I thought it had interesting deeper points that many young adult readers should be thinking about. There were actually a few points during my reading I wanted to grab a pencil and underline a sentence or two. On the flip side, there were points that I wanted to say "Enough with it already, I understand our world right now is corrupt and we have things we need to work on."

I loved Tally, and thought she was a good main character that many female young adults could relate well with. I wanted to be her friend and as soon as I put it down I had to read the next book in the series. I give this book 4 stars because I would read it again. As for the rest of the series, I'm not sure. I will do separate posts.
Posted by Debbi at 9:06 PM No comments: 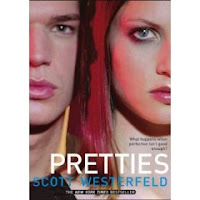 Well, I don't think that it is a spoiler to say that Tally becomes a Pretty, because it is the title of the book.

Tally is now a Pretty and I find her really annoying. She gets a message from her ugly past and all the pretty fun she is having starts spiraling downhill. With her boyfriend Zane she starts finding more and more about her past and the plot thickens. Is there more to life then being a Pretty?

I did not like this book. I wasn't sure after reading this that I even wanted to continue the series, but darn Scott Westerfeld knows how to write cliff hangers. If it weren't for that I would have stopped reading this series. Why did I dislike it so much? There were a few major reasons.

One. This is a young adult book. I know it is set in the future, but as soon as the characters turn Pretty, they are allowed to drink and party as much as they like. Hangovers are mentioned a few times, but their Pretty bodies are not allowed to get sick - therefore there are no serious consequences for all this binge drinking. I really had a hard time with that. Only a mature young adult reader would know that binge drinking - like portrayed in this book - is very bad for a persons health. I only hope that mature young readers read this. Uglies I would recommend, but I'm not sold on the idea of telling any of the youth at my church about this book quite yet.

Two. Cutting. This gets worse in the third book, but this is a serious problem with many people today and I wish that Scott Westerfeld could have found a different solution. I don't have much to say about it - just that I wish he would have used some other form.

Three. I think Tally was horribly mean to David when she met him again. I know this is a small reason to not like the book and it had all to do with her being a Pretty, but I just was sad for him. I like David.

Four. I think Pretty town reminded me of a lot of Biblical cities that were destroyed. If you are LDS it reminded me of the great and spacious tower refered to in the Book of Mormon. It was not a good place to live.
Posted by Debbi at 9:04 PM No comments: 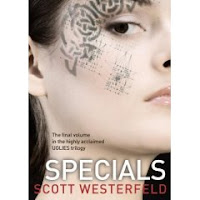 Tally made it and is now a Special. Shay is as well and they are together doing Special tricks. I liked this book a tad big more than I liked Pretty, but only because I really enjoyed the ending. There were also some fun twists that I did not see coming that I enjoyed.

Shay was rather annoying throughout the series to me, and I was really not happy that she was the boss over Tally. I was glad in the end that Tally and Shay were able to reconcile their differences and become better friends. I was also glad that Tally was able to stand up on her own two feet and go a different way.

I know that there is a fourth edition of this series coming out, I do not believe I will be reading it. Since this book was summed up nicely I believe I will leave it at that.
Posted by Debbi at 6:55 PM No comments: