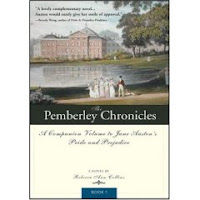 Preface: Wow. I started this book immediately after finishing re-reading the Harry Potter series and while I loved this book in the end, it took a day or two for me to get with the pace of things and not expect anyone to pull a wand from their pocket and stun someone. Can you imagine that? Mr. Darcy with a wand. Funny, but true.

If you love Pride and Prejudice and love Jane Austen novels you will not be disappointed with The Pemberley Chronicles. I think that this is one of the only novels I have read that really stayed true to Austen’s style and voice.

The first half of the book was really slow moving for me but had very good character development. I enjoyed seeing some of the extended Bennett family and friends develop. Part two of the story had much more of interesting story lines to follow and moved much faster for me. It was during part two of this story that I fell in love with this story and decided I really needed to find The Women of Pemberley, the second book of the series.

There was a lot of political history in this book. Some parts were very interesting, while at other times I found myself skimming through those passages.

I recommend this book to anyone and know I will find myself re-reading it over again. I literally laughed out loud at parts and cried over passages as well.

Harry Potter and the Deathly Hallows 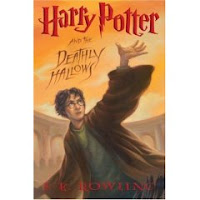 NOTE: This review will contain spoilers. If by chance you are the few that haven't read the series yet, you can read my spoiler free review by clicking HERE. I must add though, if you haven't read Harry Potter you are totally missing so much by just watching the movies - read them, they are really worth the time!

This book is awesome. I could read and reread so many times and I don't think I would tire of it. I know some people were very disappointed with the ending and the prologue, but I wasn't sad at all with how they all grew up. Of course Harry had to marry Ginny after book six. It seems like there were also big discussions about how Ron wasn't good enough for Hermione, but I don't think that at all. I think Ron and Hermione remind me of Mr. and Mrs. Weasley in a way. I also heard a lot of talk about how Harry should have become Minster of Magic, I don't agree, I am sure he had enough fame for a lifetime.

I know it sounds crazy, but I want to cry for Snape each time I read the part where he dies. I have to re-read it just to make sure he really is dead and I am so sad for him after reading all he has done and seeing his memories. He really did love Lilly and loved Harry too.

Neville is such a stud killing the snake in the ending fight scene. I think it's great that he used the coins to call everyone back and he was the one that found a way back into the school. Way to go Neville! I love it and of course it only makes sense that he becomes a professor at Hogwarts in the end.

Draco, Draco, Draco. I am so glad that Harry feels sorry for him in the end and ends up saving his life a few times during that final fight. What a poor family, I really just feel bad for them. However, one redeeming thing was done by them - it was Draco's mother that lied to Voldemort in the forest and told him that Harry really was dead.

I think one of the saddest parts of the entire book, and most people will agree is when Fred dies. Poor George. I loved these two.

I think the whole King's Cross chapter is a little "strange" (I lack for a better word), but according to the plot that Rowlings weaved, it had to happen that way. It was interesting, I'm not sure what else to say about it.

Book seven is amazing and each time I finish it I have to take a week off reading before I start anything else, or else every character in my new book I imagine with wands and magic powers. I cry each time I read it and I always have the desire to close the book after reading and then open it back up and start all over. I believe that is what makes great literature. I think J.K. Rowling really succeeded.

Harry Potter and the Half-Blood Prince

When I first read this book I seriously was left with way more questions than answers. I was thoroughly confused and couldn’t wait for the seventh book to come out. I read it and re-read it a few times. Now that I’ve been able to finish the entire series, I really enjoyed this book. It’s no wonder that it took Rowlings so many years to create this complex world of Harry Potter and weave and design the story just so. It amazes me each time I read it.

I think the biggest question when you read this book is about Snape – is he good or bad? I still have such a hard time liking him a lot, even knowing the ending. I do feel sad for him. This story also is the first time I really start to feel sad for the Malfoy family, I was so sad for Draco and so happy at the same time that in the end he really didn’t have it in him to be such a bad person.

I also enjoy this book because of the romance involved in it between Harry and Ginny. Finally! Ginny waited so long to get Harry attention and I really think they are the perfect couple.

The ending of this book always makes me cry...and my husband always makes fun of me for it, but I don’t care. I cry at the end when Harry leaves Ginny. I also cry because I love Dumbledore so much. I love that he lets Harry grow and figure out problems on his own. I love his wisdom and lectures from previous books. I have to admit I am rather sad and disappointed with what Rowling had to say about Dumbledore after all the books were released. I saw nothing that pointed to this and love the stories without that worldly addition.
Posted by Debbi at 4:08 PM No comments:

Harry Potter and the Order of the Phoenix 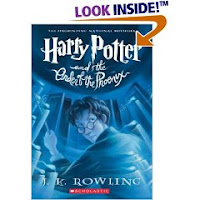 Harry Potter and the Order of the Phoenix
J.K. Rowling
5 stars

When I first read this series I didn’t enjoy book three or book five. Re-reading however, I was able to enjoy book five a lot more this time. I also spent some time watching all the movies after re-reading this book. To say that there is a lot left out of the movie is such an understatement. I think that they cast Dolores Umbridge so well it was scary, but the occlumency lessons lacked in the movie as did the visions from Voldemort and the final fight scene in the Ministry of Magic.

I loved that Harry saved Dudley at the beginning of this book. I love it even more knowing that in the end Dudley actually appreciates what he has done for him. I really enjoyed seeing Harry teach the DA classes. I thought it was interesting to see some of Snape’s memories. I was disappointed that the movie left out such important parts to some of the characters story, like when we see Neville at the Hospital during Christmas. I absolutely loved the way that Fred and George left Hogwarts with style (the movie didn’t do this justice at all).

I believe one reason that I haven’t enjoyed this book in the past is that Harry does seem very whiney and “wo-is-meish” in this book. Perhaps it’s part of him being a teenager, but I want him to get over himself and get on with it.

I’m glad that this book grew on me this time around.
Posted by Debbi at 4:06 PM No comments:

Harry Potter and the Goblet of Fire 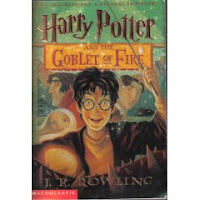 Harry Potter and the Goblet of Fire
J.K. Rowling
5 Stars

I would place the fourth Harry Potter book among my absolute favorite of the series. Harry, Ron and Hermione are finally growing up, the books start to take on much more of a grown up feel from this one out. Some of the most memorable parts of this book to me are:

-The world quidditch cup finals. I know this takes up almost the entire first 100 pages of the book but I love the descriptions and I am sad that the movie leaves out so much details of this game. I know it’s a movie and they can’t include everything, but the scenes in my mind are just fantastic – I think on the big screen they would be even better.

-I love the descriptions of the other wizard school students. This is one of the main reasons that book four is among my favorites. Not only did Rowling make this entire magical world of Hogwarts, she created other schools as well.

-Love starts to blossom in this book – jealousy as well. I loved re-reading it and knowing the end of all the relationships.