Woah. I loved this book. I think I enjoyed it even more so than The Goose Girl. I couldn't put it down, and my poor children got to enjoy playing together and making the house as messy as they could as I sat and read!

I don't want to give everything away, but Enna is able to speak the language of fire - I think that isn't giving too much away since the title is Enna Burning. Bayern is at war and she is convinced that she can save her country. The book has so many twists and turns I was devouring every bit of it!

I must say the last few chapters I was really hooked. I really thought something else was going to happen and I was going to be very very sad and disappointed! I was so sad that I almost threw the book across the room, then - twist - again, and I was happy and so satisfied with the ending.

I loved the whole book and can't get enough of Shannon Hale.
Posted by Debbi at 8:20 PM No comments:

Confessions of a Jane Austen Addict 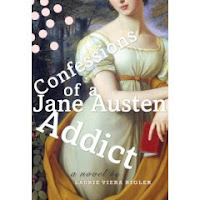 I was really looking forward to this book, and since I had finished Goose Girl and was waiting a day to run to the library to get Enna Burning, I thought I would give a try. I started it, didn't really like the first 50 pages, and I should have set it down and not finished it, but I have a really hard time not finishing a book...good or bad.

The story is about Courtney Stone, who wakes up in England, in 1813. I have a hard time with some of the language and crude subjects and maybe I should over look it for the plot and good story line -but I didn't really think either of those were there either. It was not my favorite and I don't recommend it. I don't think that Jane Austen would have liked it either. The only reason I finished it is I felt really bad not doing so, and I skimmed most of it and finished it in one day.

I have to admit too, and perhaps I am sensitive to the subject, but I believe women, then, now and forever can write wonderful beautiful novels and fulfill their roles as mothers. Motherhood is one of the most rewarding jobs ever. I think Jane Austen is a witty and intelligent enough woman that if she were to have wed and bore children she too could have been the author she became. Maybe I took it wrong, but here is her dedication:

"I dedicate this book to Austen addicts past, present and future; and most of all to Jane Austen, who bit of ivory is an endless source of wisdom and joy for this humble admirer. If there is any justice in the world, Miss Austen, then there is a parallel reality in which that lovely young man from the seaside didn't die young, you lived to write at least six more novels, and the two of you grew happily old together, preferably without children."
Posted by Debbi at 8:03 PM No comments: